A Third Reflection by Terry Rees 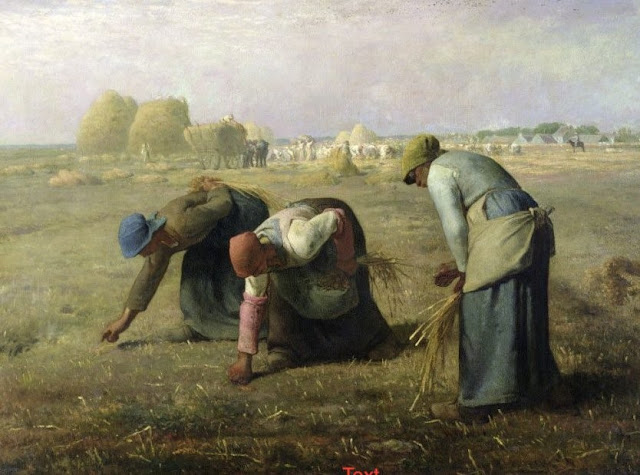 It was when Anne and I were visiting art galleries in Paris that I first encountered Millet’s painting “The Gleaners”. I have always found that the sheer surfeit of richness in any large gallery, particularly an unfamiliar one, can encourage casual movement from room to room in a largely unfocused frame of mind.  It was in that same attitude that I found myself in front of Millet’s masterpiece. Initially inquisitive, I was slowly drawn more deeply into the painting’s possible inferences and began to perceive it to be a powerful metaphor for the central meaning of the Gospel.

There is no shortage of art works around the theme of harvest. They frequently, and perhaps justifiably to a degree, romanticise rural life. However, in so doing they frequently fail to reflect the depth of poverty that defined the life of most agricultural workers in times past. Historically, rural poverty was every bit as acute as urban poverty. Although my intention in this reflection is to explore the spiritual inferences of the painting it is worth remembering that it also speaks to us with a political voice.

The strength of Millet’s work lies in the way he inverts the normal. He stands the customary representation of harvesting on its head. What is traditionally thought of as the ‘real action’  is depicted in the far distance, barely visible, whilst the dominant foreground is filled with the figures of three peasant women scavenging for the left-overs, the scraps, at the edges of the field. The peripheral and insignificant become the centre of attention. And that is surely what the Gospel does, exemplified in the ministry of Jesus of Nazareth. The Gospel inverts the gravity of ‘normal’ personal and social  values.  The Kingdom of God has been aptly referred to as the “upside-down kingdom”.

Any honest appraisal of the ministry of Jesus, as narrated in the Gospels, renders the extraordinary words of Jesus that “the last shall be first and the first shall be last” (Matt. 20:16) to be no idle injunction. Divine love does not recognise the distinction between the edges and the centre. In Christ, everyone, even those deemed to be on the distant fringes of society, especially the intentionally excluded, actually occupies the centre of Divine attention. God’s love is the gravitational force that renders the full spectrum of humanity at the centre and not the periphery.

Zacchaeus was a wealthy tax gatherer. (Luke 19). His status as ‘chief tax collector’ indicates that he was operating a pretty extensive business. He would agree contracts with his Roman masters to ensure the handing over of hefty sums, whilst having the freedom to add whatever ‘extra’ he could for himself, using any measures of coercion, dishonesty and ruthlessness that he felt necessary. Paradoxically, rich though he was, I rather think he lived ‘on the edge’ of society too, hated by his own community for his collaboration with the occupying power and the extortion and exploitation that went with the job. We are told that he was small in stature and thus climbed a tree in order to satisfy his curiosity regarding this Jesus of Nazareth,  the subject of intense interest of a surrounding crowd.

Hold this picture in your mind. Zacchaeus was most probably in a personally familiar place, safely on the edge, elevated above the throng, avoiding the jostling crowds that despised him. In social terms the periphery was his comfort zone, he could see but be unseen, unreachable too. Jesus then did the most remarkable thing. He called Zacchaeus down from his position on the edge into the very centre of attention! Jesus went even further and went to the man’s home for hospitality. In first century Jewish society, to sit at table with someone was to collapse the distance between the host and guest to the point where full acceptance was confirmed.

It is not surprising that actions such as this were so ‘upside-down’ that Jesus made enemies of those who could not begin to countenance the validity of his ministry. Jesus shook the foundations of perceived religious and social normality in the interests of fulfilling his purpose to “seek and save what was lost” (v9). I think the idea ‘to save’ carries a much wider meaning than is often adopted. Yes, it is about recognising, believing and accepting Christ, but necessarily entails turning around, cessation of going in the wrong direction, a rebirth of our thinking, perceiving and actions.

May we have the love, vision and courage to bring those at the edges of our vision into the centre.
LORD, we give thanks that everyone is at the centre of your gaze, and     not relegated to the distant fringes.
LORD, help us to be aware of those at the periphery of our vision, our          understanding, our values and our regard.
LORD, may your Spirit empower us to serve as Christ served, drawing the           outer regions of our perception and understanding into the centre of           Divine wisdom. May we be graced with the “Mind of Christ.”
at July 13, 2020 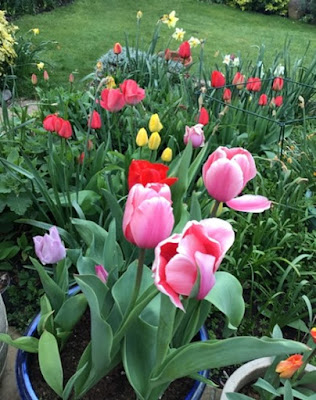