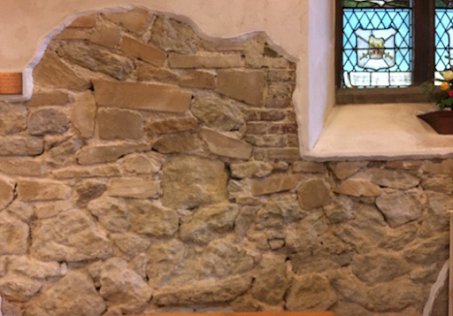 The interior of the North Wall of All Saints Church has a section deliberately stripped of its cosmetic finish . There was a persistent damp problem which remedial actions failed to cure, inevitably resulting in discolouration and flaking. Informal discussions gave rise to the notion of perhaps, initially as a trial, to make a feature of the exposed inner structure. As I recall, it was the happy trio of Eddie Arnold, Derek Comins and Bert Connel who skilfully graced us this fascinating insight into an old building technique that does not sit comfortably with our modern perceptions of uniformity, beauty, consistency, smoothness, regularity, visual correctness and slick technology. Consequently, it is a reminder to us that what we often carelessly call ‘rustic’ can be extraordinarily enduring, as well as endearing!

The first impression is that of jumbled untidiness, random stones from random places. A few resemble the kind of bricks that we are familiar with, but most have the appearance of amorphous lumps of rock, leftover bits and pieces. Some of the stones are large and bulky, suggesting they occupy a  dominant position in maintaining stability and strength. Others are much smaller, suggesting a mere infilling function. Yet, these more diminutive elements serve the important function of  preventing the larger stones from gradually slipping downwards.  Each stone, whatever its size, shape or texture has its place, thereby contributing to the integrity, strength and resilience of the wall. The strength is in the relationship between the individual stones,  not just the character of the individual parts.

This exposed section of wall can helpfully lead us into engagement with a powerful metaphor for the spiritual rationale of ‘ekklesia’, gatherings of Christian people, in other words ‘Church. After Paul the Apostle encountered the Risen Christ on the Damascus Road he felt called to plant and nurture, particularly within Romano-Greek cities, ‘ekklesia’, gatherings of believers, communities ‘in Christ’. They were to be microcosms of something much bigger, embracing the eternal, advance ‘tasters’ of the ultimate Kingdom of God, spaces where Divine love and its derivative values, objectives, relationships, worship and spiritual growth were seeded and nurtured through the active presence of the Holy Spirit. They were, by definition, to be both ‘Expressive’ Spaces’, and ‘Relational’ Spaces’, where an extraordinarily mix of Jews, Gentiles, male, female, wealthy, poor, slaves and slave owners, skilled craftsmen, unskilled labourers, and business people were to share, explore and express their new-found Faith.  From the very beginning this thing we call ‘church’ reflected both personal growth in Christ, and corporate growth within a Christ-centred community. To use a cosmological metaphor, the individual and the collective were to be like binary stars captured by the gravity of one other.

Paul’s vision for the church is not just inspiring, it is radically imaginative, going way beyond shared belief, beyond human capacities for social construction, into the realms of the Divine nature and purpose. The letter to the Ephesian Christians is generally believed to represent a relatively mature conceptualisation of this thing we call ‘church’, consequently leading it to be regarded as a later document than some others in the New Testament. As such it reflects the early path of growth of an organised Christ-centred community :

In him the whole building is joined together and rises to become a holy temple in the Lord. And in him you too are being built together to become a dwelling in which God lives by his Spirit

This is not simply a nice metaphor. It is an intended creative reality. Christ builds the Church from the building blocks of human lives, irrespective of personal history, age, gender, spirituality preference, career (past or present), status, perceived importance, perceived unimportance, past experience, future ambition, emotional endowment, or personality.  The church community, at its most foundational, can be thought of as a ‘laboratory’ of spiritual creation, a place of reciprocal learning and growth, nothing less than the first fruits of the eternal Kingdom of God, the seedings of the ultimate Divine purpose. WOW!  But, of course, it is clearly a ‘work in progress’, for the concept of the Gospel, and its spiritual treasure, is located within folk like us, imperfect, but being shaped  both individually and as a community, through the creative ministry of the Holy Spirit. Paul the Apostle spoke to what I can only refer to as an  extremely expressive, intensely relational, argumentative, vibrant, eclectic, sometimes succeeding, sometimes failing, Corinthian Church:

So, there we have it! It is truly always a work in progress! And, most importantly, it is not our work, but that of the Divine Trinity!  When we return to normal church life, perhaps it would be useful to look around at those with whom we share this sacred space, give thanks for the precious lives that are represented, and remind ourselves that we are indeed stones in a spiritual building under construction. There is a privileged place for everyone and , crucially,  in Christ, we are co-creators of one another and the glue that binds us, and holds the Body of Christ together, is reciprocal servanthood. Worth remembering that theologian Dietrich Bonhoeffer used the term “Church AS Christ’, suggesting that the church community is, or should be,  truly nothing less than a real manifestation, a showing of the Resurrected Lord, a microcosm  of the eternal Kingdom of God.

The interior of the North Wall of All Saints Church has a section deliberately stripped of its cosmetic finish . There was a persistent da...